The British Red Cross, Save the Children and Islamic Relief have all launched emergency appeals as the refugee crisis in Europe continues to escalate. 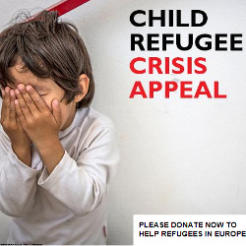 The British Red Cross, Save the Children and Islamic Relief have all launched emergency appeals as the refugee crisis in Europe continues to escalate.

Meanwhile, the Disasters Emergency Committee has said that it is closely monitoring the situation, although at present concludes that a DEC appeal is not required “in order to secure the necessary funding for the work of our members”.

In a statement the umbrella body said: “We are appalled by the suffering and loss of life amongst people seeking to flee to European countries, whether they are escaping persecution or simply in search of a better life.

“DEC member agencies and their partners are giving practical support to migrants and refugees across Europe by providing food, water, shelter, clothes, medical care and protection for vulnerable children.”

Prime Minister David Cameron has announced today that “thousands” more Syrians will be allowed to resettle in the UK. The extra refugees will come from UN camps bordering Syria, and not from among people already in Europe. He said that Britain will act with its "head and heart" as he pledged to help find long-term solutions to the crisis.

The British Red Cross, which launched its Europe Refugee Crisis Appeal last night, said that the number of people forced to flee violence and conflict is the highest since World War II.

Ben Webster, head of emergencies at the Red Cross, said: “People are arriving in Europe with very little – some only a family photo and the clothes they left in.

“We urgently need supplies such as food, water, nappies and hygiene kits as well as emergency medical treatment – your support can make a huge difference.”

Save the Children’s Child Refugee Crisis Appeal was also launched yesterday. The charity says it is working across Europe to support refugee children and their families.

It said: “In Italy we work in reception centres to assess children’s needs – both their physical and emotional health. We offer them showers, clothes, food, medical support and legal advice to families.

“In Greece we are working to make sure children in refugee camps are physically safe, have adequate food and support for their mental health.”

The plight of refugees coming from Syria and elsewhere has seen a shift in how it is portrayed in the media after images of the body of a three-year-old boy washed up on a beach in Turkey appeared on the front pages of almost all national newspapers yesterday. Calls for the Prime Minister and government to do more to help those in need have increased dramatically, with pressure being put on in the form of petitions.

One petition, on the campaigning site Change.Org, was started by poet and art-critic Sue Hubbard and has now received over 238,000 signatures. People are also being encouraged to help further by sending real signed letters to the desks of decision makers to encourage more to be done to help the refugees.

Supporters can use the Mr Postman campaigning tool, which allows campaigners to write physical letters to be sent to influential people from their computers and smartphones.

Another petition set up by The Independent is directed at Cameron and states that “Britain must accept its fair share of refugees seeking safety in Europe”. It has received over 252,000 signatures.

A petition on the government's e-petition website has attracted more than 360,000 signatures, surpassing the 100,000 needed to be eligible to trigger a debate in Parliament.

The Charity Commission has issued advice on donating to the appeal, encouraging people to find a registered charity through its online search tool.

Sarah Atkinson, director of policy and communications, said: “There are laws around collecting money for charity in public which are there to protect donors and make sure that the money raised goes to a genuine charitable cause. Follow our advice to make sure that whether you give online, by phone or in person you are giving safely.”

The Commission’s ten tips for giving safely can be found here.