Islamic Relief has recently had its bank account closed by UBS, and is under constant scrutiny by other banks due to nervousness about counter-terrorist regulations, the charity's director of finance told an audience of international charity regulators yesterday. 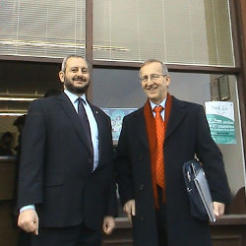 Islamic Relief has recently had its bank account closed by UBS, and is under constant scrutiny by other banks due to nervousness about counter-terrorist regulations, the charity's director of finance told an audience of international charity regulators yesterday.

Islamic Relief, a charity launched in the UK 30 years ago with an income now over £80m annually, has both incoming and outgoing transactions stopped on a daily basis either temporarily or permanently, said Haroun Atallah, who is a former auditor.

Having worked for Islamic Relief for 19 years, Atallah says things changed significantly for international charities after the September 11 attacks. He says for charities like Islamic Relief and others working in Gulf regions scrutiny is particularly high:

"Charities like us were put in a situation where you had to explain yourself at every juncture, way beyond what any other charity had to do."

He says that regulations preventing the movement of funds under the guise of anti-terror methods, are also preventing relief funds reaching those who need it on the ground. The Financial Action Task Force, an inter-governmental body, sets recommendations for banks and financial institutions. These influence banking policy and some banks are "going over the top in their reaction", Atallah said.

One such example he offered was UBS, which not only closed Islamic Relief's account, but blocked donations coming from its customers to the charity.

Atallah told civilsociety.co.uk that the charity had opened an account with the bank in July this year with the intention of using it for donations from high net worth individuals. But by August the charity hadn't yet activated it and was then contacted to advise the account would be closed down. At that time, Atallah said, Islamic Relief did not think it was being targeted. But when it was advised in September by UBS customers that their donations to the charity had been blocked by the bank, Islamic Relief realised it had been black-listed. Islamic Relief was offered no explanation by  UBS for the blocks. Despite writing to the managing director of the Swiss bank, only a "bland response" advising the action was in line with UBS policy was received.

The problem is wider, Atallah told an audience of international regulators at the House of Lords yesterday, because banks working internationally are subject to rules and regulations in different countries, and can be fined if they don't comply:

"The banking sector has been asked to play an increasingly important and influential role. I mentioned UBS bank but UBS bank is only one bank. You will have heard of the fines against Standard Chartered. But I can tell you every major bank here in the UK has been fined. HSBC, Barclays, RBS, they’ve all been fined a settlement with the Treasury department in the US for breach of the screening and counter-terror rules.

"The impact we see on the ground in Islamic Relief is that, like UBS, they were fined, they upped their risk assessment criteria, and we got caught in that. When they raise the standards, I can’t speculate exactly why we appear as a higher risk than other organisations, but it means we have become a higher risk. And from their [the banks'] point of view, 'we can get rid of this risk by stopping work with these people'."

He advised that Islamic Relief's main bank, Barclays, which it has banked with since around 1996, decided after it was fined not to do business at all with Sudan, Iran, or any other sanctioned countries. So Islamic Relief was forced to go to other banks in order to continue its humanitarian operations within these countries.  Atallah said Islamic Relief is constantly at risk of having its accounts closed:

"The banks are very nervous, but I think the extent of their nervousness is driven by who is the customer," he said.

"Because we are a main customer [of Barclays] they haven’t decided to close our accounts down, but they keep us under very close watch.”

There are 19,000 charities on the Charity Commission register working overseas, around 10 per cent of all UK charities, with a combined income of £22bn.