Runners in yesterday’s London Marathon have already raised £43m through digital fundraising platforms, with the total amount set to exceed £50m for the first time. 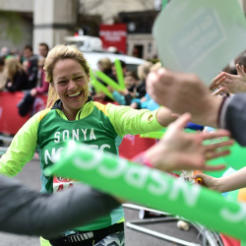 Runners in yesterday’s London Marathon have already raised £43m through digital fundraising platforms, with the total amount set to exceed £50m for the first time.

Virgin Money Giving has confirmed that it has already raised £23m through its digital giving platform, a 12 per cent increase from this time last year, while JustGiving have passed the £20m mark, an increase of some 10 per cent.

Between Virgin Money Giving and JustGiving, the total amount set to be raised digitally for the 2016 marathon is expected to exceed £50m for the first time ever.

Jo Barnett, executive director at Virgin Money Giving, said: “The London Marathon is hoping to set a fundraising world record for the tenth successive year in 2016.

"Our data shows that our fundraisers are set to smash our previous record and raise over £25 million for charity.”

In a blog written before yesterday’s marathon, Louise Nolder, head of communications at JustGiving said that the digital fundraising platform had also seen its marathon donations grow by 12 per cent year on year.

NSPCC, the official charity partner of the 2016 London Marathon has been contacted by Civil Society News for an initial fundraising figure.

The 2016 London Marathon was also the largest in terms of participants, with around 40,000 people running in this year’s event.

Data insight company Starcount have said that the National Trust, Help for Heroes and Cancer Research UK were the three most popular charities amongst the runners of the 2016 London Marathon.

The figures also show that the most popular types of organisations for runners were children’s charities with 44 per cent of participants following at least one such charity. Some 25 per cent of runners follow at least one green charity and 17 per cent follow an armed forces charity.