The Charity Commission will aim to strike a balance between regulation and support as the sector heads into challenging times, its new chair said this month. By Kirsty Weakley. 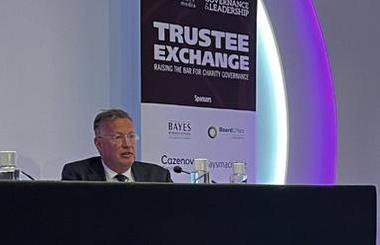 Delivering his first speech in post at Civil Society Media’s Trustee Exchange conference on 4 May, Orlando Fraser set out his priorities for the sector.

He thanked charities for what they do, and said: “The breadth of charities’ work is incredible, and you really do make our countries more hopeful, more loving, and more cohesive places.”

He said it was “both an honour, and a pleasure” to start the new job.

“My intention is to lead an expert regulator that is fair, balanced and independent,” he added, and said that under his leadership the Commission would aim to strike a “balance between being robust and benign” in regulating the sector.

Where charities “are poisoning charitable status for everyone else” it is important the Commission takes tough action, he said, but added that the Commission would look to be more lenient where there had been an innocent mistake.

“After all, the Commission is not regulating a for-profit sector, but a sector which is by and large a place where wonderful loving things are being done every day, and where honest mistakes can happen in the process.”

‘Beholden to no one’

On the issue of the regulator’s independence from government, Fraser said: “We must act without fear or favour from any other entity, whether it be government, party politicians, beneficiaries or indeed the sector.”

He added: “While we will report to Parliament, we will be beholden to no one in applying the law, but the law itself.”

Fraser acknowledged that many charities expect to see demand for services increase, and are worried about funding.

He said: “I fear that the months and years ahead will be challenging for charities, as they will be for many households.” This means the regulator “must be mindful of the challenges that trustees face in the months ahead”.

While the Commission cannot directly fund charities, Fraser said it would look at improving guidance and making it easier to find.

He urged trustees to act as ambassadors for their charities in encouraging others to join trustee boards, saying: “You are statistically the most likely people to be able to recruit more trustees for your own charity. So please don’t lose sight of this special trustee superpower: advocate for your organisation, for the endorphins of volunteering, and the good work that you do.”

He also urged charities to “work to make any recruitment drive as inclusive and diverse as possible”.

And he paid special tribute to charities that work internationally, singling out “Oxfam’s water tanks saving lives in Africa and Save the Children’s mission to alleviate the awful suffering of children in Ukraine”.

Fraser also name-checked several of his predecessors in the role, saying he was “picking up a baton held with distinction by previous chairs such as Suzi Leather, William Shawcross, Tina Stowell, and of course most recently our stoic interim chair Ian Karet”.

Appointment confirmed despite objections from MPs

Fraser’s appointment was confirmed by the secretary of state for Digital, Culture, Media and Sport (DCMS) on 1 April despite the refusal of the relevant scrutiny committee of MPs to endorse his appointment.

Nadine Dorries selected Fraser from the reserve list of appointable candidates interviewed last year, after the original choice for the post, Martin Thomas, withdrew before he had started.

MPs on the DCMS committee said that although they had no concerns about Fraser as an individual, they could not endorse him because the appointment process had been a “fiasco” and should have been rerun from scratch. But the government pressed ahead with its choice of Fraser as chair.

Fraser was one of two legal members on the Commission’s board between 2013 and 2017, when William Shawcross was chair of the Commission. He also chaired the governance and remuneration committee and the policy and guidance committee.

Fraser has had a long involvement in the charity sector, having taken part in an aid convoy to Bosnia in 1992. In 2017, he supported the Rugby Portobello Trust charity through the Grenfell tragedy. He has also served on NCVO’s advisory council.

He was a Conservative candidate at the 2005 election, and later acted as an adviser to the Conservative Party on voluntary sector issues, which was declared when he was appointed to the Commission’s board. He was also a founding fellow of the Centre for Social Justice think tank, which was established by Iain Duncan Smith. Now he says he has no political affiliations, but Acevo and NCVO issued a joint statement voicing concerns about his party-political links.

The government’s previous preferred candidate, Martin Thomas, resigned from the role before he even started, after it emerged that he had not told the interview panel of a complaint about his conduct at a charity he had previously chaired.

However, an investigation by William Shawcross, who is now the public appointments commissioner, concluded that the process that saw Thomas appointed did not break any rules and was “consistent and fair”. However, he recommended that departments should review how they manage reference checks and appointment announcements after finding that DCMS was one of four departments never to seek references.