Mike Adamson: the British Red Cross is changing the way it fundraises

Red Cross chief executive Mike Adamson tells Emily Corfe about the changes to fundraising the charity is considering in response to greater regulation, and its plans to cut £10m from its costs as a result. 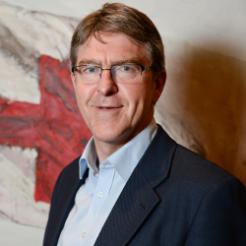 Red Cross chief executive Mike Adamson tells Emily Corfe about the changes to fundraising the charity is considering in response to greater regulation, and its plans to cut £10m from its costs as a result.

It’s been little more than a year since Mike Adamson took up the position of chief executive at one of Britain’s largest charities, but big changes are already afoot.

Following a year of fundraising scandals in the sector, the British Red Cross is ramping up efforts to ensure its fundraising efforts remain primarily “respectful of donors”.

Adamson estimates that the charity will face reductions of 10 to 20 per cent in its income from direct marketing, and will need to make £10m annual savings as a result.

It’s a swift change for a charity that has historically advocated direct marketing - enthusiastically so - and led the way with policies like the ‘three time ask’, which required fundraisers to ask for money three times in each contact.

But, whether it’s the presence of new leadership or greater public scrutiny of fundraising practices, times are changing for the British Red Cross.

Adamson is currently chairing NCVO’s working group to develop proposals for charities to comply with upcoming EU regulation requiring charities to have “unambiguous” consent before contacting people, and he is keen to lead by example.

“We are making sure that we have really respectful, enduring relationships with people who are inspired by our cause and therefore want to give more. So we’re evaluating how we strengthen the quality assurance of our fundraising practice,” Adamson tells Civil Society News.

Part of those plans to tailor fundraising practices in line with public demand and future regulation, include the implementation of a “comprehensive quality assurance framework”, overseen by an internal committee at the charity.

This in turn will provide “complete assurance for the board that the charity is doing this in the right way”, says Adamson.

These changes have come despite the charity receiving very few complaints by donors over its fundraising practices in the wake of the Olive Cooke scandal, he says.

“There has been no discernible change in the number of complaints or cancellations of direct debits that we have had, compared with what went before. But that doesn’t mean that we don’t have to change,” says Adamson.

“We used to swap data with other reputable charities. We don’t do that any more. We never cold-called and we never sold people’s data.”

Options for change currently being considered by Adamson include bringing telephone fundraising in-house and working closely with the Information Commissioner to agree a timeframe on the storage of donor data - details of which are due to be announced shortly.

“In the past, some of our fundraising has been more transactional, which is a risk when you are building relationships with hundreds of thousands of people,” says Adamson.

“The switch we are making is to become much more relationship-based and much more cause-based so that you have more information about the impact that your donation is making and you therefore want to support for longer."

He says the ultimate aim of the work on unambiguous consent is a sector that gives donors full control over their own data.

“Our vision is of a world where people can manage their own data and what they give consent for their data to be used for. Just as you manage your preferences on Amazon or in other fields, that’s what will be happening I’m sure with fundraising,” says Adamson.

But hand in hand with tighter fundraising regulation and donor control of personal data, comes the looming possibility of financial instability for the charity sector as a whole. While Adamson puts the estimated value of lost revenue to charities at “hundreds of millions of pounds”, others have pinpointed a figure closer to £2bn.

To keep abreast of changes, Adamson is leading the British Red Cross through a change period - overhauling its modus operandi from a geographical-based model to a service-based model.

The changes are part of a strategy named Refusing to Ignore People in Crisis, expected to save the charity somewhere in the region of £10m a year over the next three years, according to Adamson.

“We are looking at a 10 to 20 per cent reduction in income from our direct marketing per annum. And that’s very material for us. That’s why we’re looking at £10m of savings per annum as a target,” he says.

But according to Adamson, rumblings of cost-cutting measures at the British Red Cross were in place even before the fundraising scandals of last year - coming partly as a result of pressure from public sector cuts that has seen demand for the charity’s services rise, in turn creating a need to refocus funds towards services.

“While there has been an impact as a result of the fundraising changes, in all honesty we would be making a lot of these changes anyway because we can release resources by doing things differently in order to provide more support to more people,” he said.

“The world has changed – whether it’s the refugee crisis around the world or cuts to statutory services around the UK. We are needed more than ever, so I’m sure we won’t be the only charity that is going through this whole kind of change process.

“We have been very clear from the beginning, with our input to the Etherington Review, the public administration committee review and every other review, that we have to change. We need a new regulatory framework and we need a much better way to balance off the interests of the people that give us money and the beneficiaries.

“The sadness I have is that whereas the initial attempt would be to reinvest all of that money back into the front line, into services to people in crisis – clearly some of that will now be helping to balance the books.”

As part of the new strategy, Adamson says “significant reductions” will be made to the charity’s 675 properties - including shops and operational properties across the UK such as local branches and points from which wheelchairs are collected.

And alongside cost-cutting measures, will come redundancies - with a minimum of 100 currently expected.

Adamson admits it’s “inevitably a very, very unsettling” time for staff. But he is making effort to ensure an open line of communication.

“It’s not just all top-down, ‘here is the party line, read it’ kind of thing. I am listening to people who can have their voices heard,” he says.

“It is challenging trying to do the right thing – both by people in crisis which is why we exist and which is what we were created 150 years ago to respond to – but then by doing the right thing by our people in the organisation. It is genuinely very difficult when you have got to change a way of working, in order to do something better.”

For many staff and volunteers working in regional areas of the UK, there’s a worry that the British Red Cross will lose its sense of “localness”, Adamson said.

“But it’s very hard to be local from Land's End to John O'Groats,” says Adamson. “And should it always be about the physical presence or about ensuring that the services that we provide are accessible?”

Adamson’s restructuring efforts include the streamlining of back-office operations to become “as lean as we can possibly be”, taking advantage of the charity’s size to cut costs on everything from procurement and supplier arrangements to learning support.

“Where we are currently doing things many times, because we have a geographical-based model, we will now do things once,” says Adamson.

As part of the first stage of the restructure, Adamson is appointing a new “top team” to implement the process. With interviews due to take place this week, the team will include directors for independent living and crisis response services, directors for refugee support services and directors for event first aid and ambulance support.

The charity has also made efforts to ramp up its digital presence, employing its first-ever chief information officer a year ago. Strategy SMT discussions billed for this week, include the charity’s “embryonic digital strategy”, Adamson said.

“We want to take digital onto another level to make sure that we are using digital technology both internally to do things more smartly – for example where volunteers can declare when they are available and match them up with slots when we need volunteers, right the way through to how somebody who needs a wheelchair can book one online and then have it delivered at a time of their choice.

“But like many organisations that have been around a long time, we also need to make sure that our existing technology is fit for purpose.”

Despite the uncertainties for staff around the UK, Adamson is hopeful the new measures will shore up the charity for the future.

“The fundraising environment has changed. We are very fortunate to have a strong balance sheet – strong asset base and good reserve levels – but if we don’t make changes, then that will change.”