Most of us are feeling the pinch of higher bills and food prices, but is this translating into fewer donations? Sam Wait investigates. 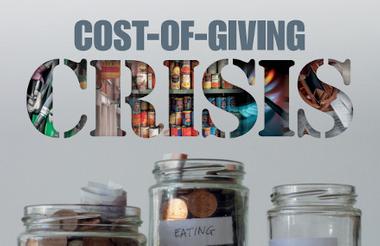 Coming hot on the heels of the pandemic is a cost-of-living crisis, with inflation in the UK set to hit 10%. It’s tough to see the bright side; fuel, food and bills are increasing and people across the country will be looking for ways to save money as a result. The Office for National Statistics reported in April that 91% of UK adults have experienced the rising costs. This poses a difficult question to charities: Will charitable donations be one of the first expenses people cut?

Research by the Charities Aid Foundation (CAF) suggests this may be the case. The cost-of-living crisis has prompted one in seven (14%) people to say they will cut back on charitable donations to help manage their bills, according to its 2021 Giving Report, which collates data from monthly surveys of around 1,000 people.

Alison Taylor, CEO of CAF Bank and CAF Charity Services, says: “We first highlighted the decline in the number of people giving in 2016. This briefly stalled during the initial stages of the pandemic, but our research shows that donations are continuing to fall even further. Rising inflation also means that in real terms, donations are not worth as much, with Pro Bono Economics estimating that a £20 donation in 2021 will be worth £17.60 in 2024.”

One of the largest UK charities, Cancer Research UK (CRUK), says it has seen a “mixed picture” on its fundraising income over the last two months. While some digital challenges it has launched have received disappointing responses, other campaigns such as the BowelBabe Fund for Cancer Research which has raised £6m, have proved successful.

Philip Almond, executive director of marketing, fundraising and engagement at CRUK, says the full effect that the rising cost of living will have on fundraising income is hard to know. “It is too early to see exactly what impact the cost of living and shifts in consumer confidence is having on fundraising. We are seeing from surveys an increase in worries around finances, and changes in claimed giving trends to charities, but we don’t yet have a clear view of the impact this is having on donations. There are internal and external factors outside of cost of living that are impacting performance, making isolating any impact very tricky. For example, timings of activities (changes post-Covid lockdowns), cost increases due to inflation, and some delays to operational changes are all impacting contribution.”

Almond says CRUK has not yet seen a change in the number of people stopping their regular donations, but did see a slight decline in new donor acquisition rates in April. “We can’t separate out what degree cost-of-living factors are contributing to this, but it is more than likely driven by market factors such as less footfall in key recruitment areas and higher costs in media channels.”

However, some smaller charities are feeling the impact of the economic downturn more immediately both in income and demand on services. Marie Peacock, CEO of Yorkshire’s Brain Tumour Charity, says: “The current ‘cost-of-giving’ crisis is much bigger and is hitting our charity harder than the pandemic ever did. There has been a huge drop-off in donations since the start of the year, not just in monetary donations but in charity shop donations of items too. At the same time, we have seen a 95% increase in requests for our patient grants as people receiving a brain tumour diagnosis are finding themselves in a serious financial crisis.”

Maria Hanson MBE, founder of the Derby-based charity me&dee, says she is seeing similar at her charity. “Donations, like the economy, are grinding to a halt. Recently we have lost five of our regular monthly supporters. This is our only set income, and therefore a massive concern. Our number of applications have doubled and we do not have double the resources.”

Even WaterAid, a large charity by comparison, says it has also started to see the impact of the crisis. Nick Miller, head of supporter activation at the charity, says: “Over the last few years, we have seen a positive response from the public and supporters to WaterAid campaigns. However, we have started to see the impact of the cost-of-living crisis and are keeping this front of mind as we plan our activity and communications to supporters.”

Paradoxically, the crisis seems to be benefitting some charities. Turn2us has seen fundraising income increase over recent months. Peter Olawaye, corporate partnerships manager at the national anti-poverty charity, thinks this might be due to the relevance of the charity’s work to the economic crisis.

Olawaye explains: “The news agenda remains heavily dominated by the economic crisis and the spiralling cost of living. This keeps charities such as ours – those at the heart of anti-poverty and income maximisation work – at the forefront of the issue. This could have a knock-on effect on those charities whose work is no less critical, but that does not necessarily fit in with the ‘here-and-now’ agenda.”

Changing Faces, a charity for people with visible differences, has been sharing resources that might help donors with the cost-of-living crisis, and has seen a larger engagement because of it.

In a statement, the charity said: “At Changing Faces, we’re taking particular care to listen to what our donors are thinking and feeling right now, and making sure our messaging stays relevant and shows respect for difficulties they may be facing.

“We’re posting much more frequently on social media to provide friendship and support. We’re sharing resources that might help, even if they’re not from us. Interestingly, over the last month, our engagement with supporters has gone up across all channels.”

The charity says it has not yet experienced the anticipated loss in giving, and feels fortunate not to have done so. It is a medium-sized charity, with its financial reports for 2021 recording an annual income of £2m. Almost 100% was gained through fundraising. The statement says that although the charity is yet to experience a drop in donations, it will be looking to diversify its income to protect against any future downturn. “There is lots of uncertainty at the moment. It is clear we will need to continue to be agile and sensitive in responding to shifts in donor behaviour and attitudes, while seeking to diversify our income in this time of rapid and uncertain change.”

In previous crises, causes related to animal welfare have been pretty resilient, but even those charities may feel the pinch this time. Nick Daniel, marketing director at Dogs Trust, says: “There are some early indicators of a drop in response, due to either the cost-of-living situation, or a focus on other issues, most notably the crisis in Ukraine. Thankfully, the charity’s income has remained flat, but there is significant pressure to see income increase. People’s fears of the crisis, whether or not it’s impacting them directly yet, will influence their giving behaviour. So it’s going to be a challenging time.”

Faye Jones, fundraising manager at Shepton Mallet-based charity Happy Landings Animal Rescue, says her charity is feeling it acutely: “Since the increased price cap for energy in April, the number of donations we’ve received online has more than halved, and with the price cap set to rise further, things are looking exceptionally bleak. We’ve had a handful of people cancel their direct debits in the past month. Our supporters are worried about the state of their finances in the coming year due to higher inflation and rising interest rates, and are reluctant to sign up to any new financial commitments.”

What can charities do?

Taylor from CAF suggests that charities must invest in fundraising to ensure they do not lose donors. “Charities will have to find even more efficiencies in their operating models, invest in fundraising and look for ways to make their existing resources go even further, including their cash reserves. Building financial resilience will remain a priority, including expanding the ways in which income is generated. Connecting to younger donors will also be essential to ensure the long-term future for the many charities who rely on mass giving.

“Now is the time for charities to make every effort to remind UK taxpayers about the value and vital importance of declaring Gift Aid, which effectively adds 25% to every donation. It is estimated charities lose out on more than £500m every year from unclaimed tax relief.”

Charlotte Weatherley, policy manager at the Chartered Institute of Fundraising, also stresses the importance of fundraising to connect to both old and new donors. “Fundraising is going to play a pivotal role in connecting charities with donors passionate about their cause and making giving more accessible. Recently, we have seen our members adopt digital channels to engage with new audiences, while adapting quickly to different social distancing measures. Going forward, investing in fundraising and fundraisers’ professional development will be critical to navigating this difficult time.”

To curb a potential drop in donors, Dogs Trust will be trying to become more audience-centric with the aim that it will retain its donor support. “Charities have a habit of being organisation-centric rather than audience-centric,” says Daniel. “We are trying to change that and expand the ways in which people can engage with our work, and then hopefully support it.”

During the cost-of-living crisis people will be looking to charities for support, as they did during the pandemic. That puts a lot of pressure on those providing services, not only to remain financially stable, but also to provide the same level of care as always.

Almond from CRUK says that contingency planning is the answer. “We need to plan for the impact this has on our supporters, our fundraising teams, and our staff as individuals. Planning is a continuous process and, as in all times, we adjust our plans in line with changes in performance. We learnt through Covid-19 the importance of being able to pivot at pace and will continue to do that as and when needed.”

For some, the only solution will be government intervention. Jones at Happy Landings Animal Rescue says: “The government needs to address the extenuating circumstances in which charities are operating; they have barely had time to recover from the pandemic, before being hit by record levels of inflation. People and communities throughout the UK rely on the critical support and services that charities provide. If the government does not do more to ensure the longevity of the charitable sector and recognise the immense value that charities bring to people’s lives, it is ultimately the people in our communities who will suffer when these key services fall away.”

Strategist at independent media agency, the Kite Factory, Lydia Martin says that maintaining trust with charity audiences will be a key part of getting through this crisis. “This will help build long-lasting relationships with consumers that will be remembered beyond the crisis,” she says. She suggests a few strategies that can support with this:

@wait_samantha is a reporter for Civil Society Media 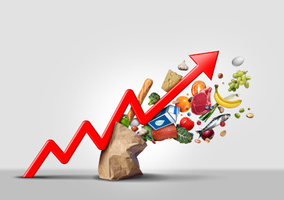 Stephen Cotterill: We thought the pandemic was bad...